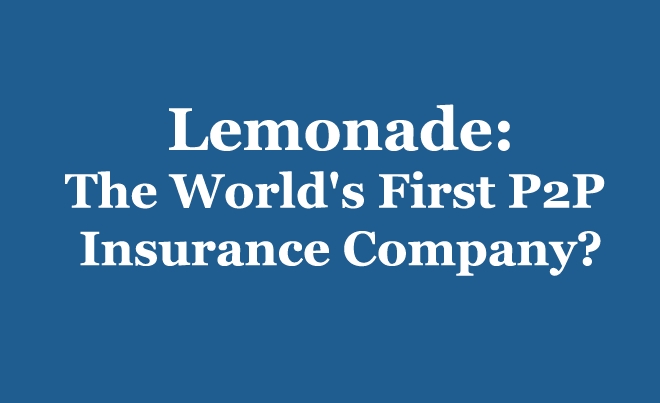 Lemonade, the US's first peer-to -peer insurance company, has been licensed as a full insurance carrier by New York State. NY homeowners and condo owners and renters can now get insured and settle claims instantly, anytime and from any device.

"Technology drives everything at Lemonade" said Shai Wininger, President and co-founder. "From signing up to submitting a claim, the entire experience is mobile, simple and remarkably fast. What used to take weeks or months now happens in minutes or seconds. It's what you get when you replace brokers and paperwork with bots and machine learning."

Lemonade's technology cuts costs as well. Lemonade's home owner's policies start at $35 per month, and renter's at $5 per month. In addition to digitizing the entire insurance process, Lemonade reduces costs through giving. In a reversal of the traditional insurance model, Lemonade treats premiums as if they were still the property of the insured, returning unclaimed money during its annual 'Giveback'. Giveback is a unique feature of Lemonade where each year, leftover money is donated to causes. Cause-selection creates virtual groups of like-minded people, or 'peers.' Lemonade uses premiums from each grouping to pay the claims of those individuals, giving back leftover money to their common cause.

Lemonade is reinsured at Lloyd's of London, and by Berkshire Hathaway (National Indemnity) and other leading reinsurers.

Ian Youngman, industry analyst and author of the brand new report "Peer to Peer Insurance" comments, "Lemonade claims to be the world's first p to p insurer but this is misleading. There are two in the Netherlands that are fully legal, as is the one in Colombia and one in the Czech Republic and one in the UK. The five others in Canada, China and South Africa are not legally authorised."

Youngman goes on to explain, "Technology drives everything at Lemonade from signing up to submitting a claim, the entire experience is mobile, simple and fast. Lemonade is available in both mobile (iOS and Android) and web versions."

Reversal Of The Traditional Insurance Model

In addition to digitising the entire insurance process, Lemonade reduces costs through giving. In a reversal of the traditional insurance model, Lemonade treats premiums as if they were still the property of the insured, returning unclaimed money during its annual Giveback. Giveback is where each-year leftover money is donated to causes. Cause selection creates virtual groups of like-minded people so that each pool chooses a charity. Lemonade uses premiums from each grouping to pay the claims of those individuals, giving back leftover money to their common charitable cause. Lemonade takes a fixed fee out of monthly payments, buys reinsurance and uses the rest for paying claims.

Premiums are calculated individually for each policyholder and are based on a number of different factors including credit history, recent claims and information about the property including its age, size, and construction quality. It also factors in the sensitivity of the home to windstorms, severe weather damage, and fires. It then provides discounts for protection equipment installed, such as fire and burglar alarms.

While prices tend to be cheaper than the more established players, that won’t always be the case. Insurers use different models and data sets to set prices, and on occasion Lemonade prices will be higher than someone else’s.

On Lemonade Insurance the platform handles all claims. Customers open the Lemonade app and hit the Claim button. After they complete the claim report on the Lemonade app, they provide bank account wire information. Once the claim is approved, payment, minus the amount of the deductible, goes directly into that account.

The goal is for the majority of simple property claims to be paid almost instantly. There will be cases in which it will need to fully review the incident to approve the claim, and there will be property damage claims or liability claims that may take longer to settle. Lemonade asks all customers to record a video during the claims process.

This promises to be one of the better ideas but progress will be very slow as it has to get regulatory approval on a state-by-state basis in the USA.

What may make or break it, is the plan that money left in the pool at the end of the year if claims and fees have not eaten it all up, do not go back to the customer but to a nominated charity. Whether customers will welcome the demand that they video the claim and that prices may not be much lower is going to be interesting. Effectively, Lemonade argue that if prices are higher then customers need not worry as spare money goes to charity. How Lemonade reconcile the argument that the money does not belong to the insurer but to the customer, with giving surplus to a charity rather than what other p to p insurers and brokers do, back to the customer, will be interesting as it smacks of arrogance from the platform.

No Part Of The Insurance Value Chain Is Safe From Change