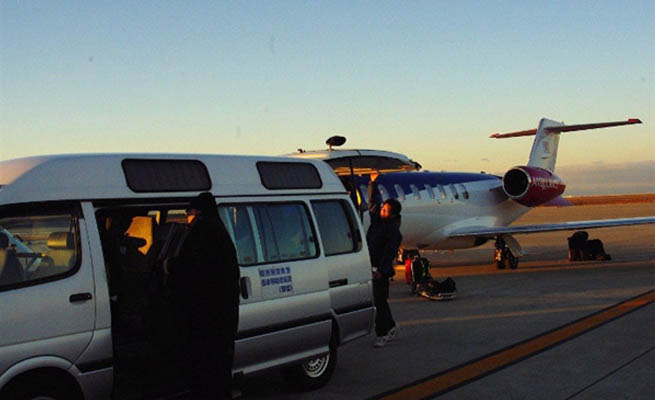 There is no quiet time for European Air Ambulance. Even during periods when others are enjoying a holiday, EAA teams have to be on stand-by for any eventuality. Each mission carried out by EAA is unique, but some stick in the memory more than others.

A Japanese journalist in Kuwait to cover that country’s elections ends up injured in a taxi accident. The taxi driver dies at the scene, but the journalist survives with severe injuries. He is admitted to a Kuwaiti hospital for treatment. His insurance company is contacted to arrange his transfer back to his native Japan. Due to the serious nature of his injuries, the insurance company decides to use European Air Ambulance to carry out the transfer between Kuwait and Japan. After all, EAA has the requisite equipment, experience and know-how to transport intensive care patients over long distances. As soon as the patient is deemed well enough to travel, EAA will carry out the transfer from the hospital in Kuwait to a hospital in his hometown of Nagoya.

“Planning a flight that has to go half way around the world is highly complex,” explains EAA flight planner Jürgen Willems.

For a start, weather conditions have to be taken into account; particularly during seasons when conditions are unpredictable and can change by the hour. Short-term contingency planning has to be made to adapt to the circumstances. In addition, wind direction also has to be taken into account. A following wind can allow an aircraft to travel further and means different and fewer stops than when facing a head wind, which can lead to more fuel consumption and therefore require more landings en route. The countries being flown over can also affect the flight planning. Flying over India and China, for example, can involve complications.

Flying over Indian airspace or making a stopover landing there involves dealing with lots of bureaucracy, while China often refuses flights in its airspace by foreign airlines. “But the quickest way to fly the patient from Kuwait to Japan involved flying over both India and China,” says Willems. “We planned the mission so that the crew would have an overnight stay in Kuwait. This had two advantages. Firstly, it allowed our medical team to visit the patient in hospital the day before the flight and to get their own impression of his care and state of health. Secondly, it meant we didn’t lose time by having to change crew in Kuwait for the Japan leg of the flight. The whole flight planning team was involved, and so we were fully prepared for any eventuality in case of last-minute changes due to meteorological conditions, or a short-notice withdrawal of overflying or landing permissions.”

While the flight planners were in “crisis” mode, pilots Robert Marquet and Eric Wagner were taking off in air ambulance LX-LAA for Kuwait. On board were the medical team of Dr. Mark Schorr and intensive care nurse Guido Genten. As planned, the medical team was able to visit the patient in the hospital in Kuwait the day before his repatriation.

“The medical standards in the Kuwait hospital were very high. It was a private clinic with state of the art equipment and internationally experienced doctors. The patient was receiving optimum care, something that we do not often find,” says Guido Genten.

“When we arrived to collect the patient for transportation to his home the next morning, everything was prepared.” An ambulance, which had been organised by the flight planners, was ready to transport the patient and the medical team to the airport. “The patient was receiving artificial respiration, but was in a stable condition. Because of his skull-brain trauma, he was also receiving a drainage to siphon off excess fluid and prevent swelling,” explains Genten.

“In the hospital, such a system automatically drains the right amount of fluid from the brain. But in an airplane you have to take into account pressure differences and often have to carry out the drainage manually.”

Thanks to the optimal care on board the aircraft, the flight from Kuwait to Japan ran smoothly. “In Japan we experienced the great cultural differences between Europe and Asia.”

As difficult as it was to get landing permission in Japan, everything was made easy for the crew at the airport. Hardly had the aircraft touched down on the tarmac when it was met by a high-level official from the airport authority, who personally ensured that the medical team and the patient could avoid the usually strict security controls. “I have rarely experienced such a smooth operation. Even the next day, when we had to pass through the security checks again, they were performed efficiently and with great courtesy. In less than three minutes our passports had been scanned and our fingerprints had been taken. We didn’t even have to carry our luggage – it was taken straight to the aircraft.”

Once half way around the world in a short time, coming into contact with different cultures and facing the challenge of difficult weather conditions and political adversity – just an everyday and yet extraordinary mission.