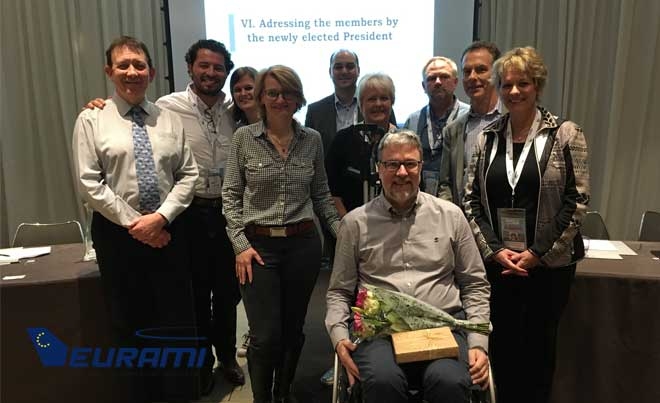 With the International Travel Insurance Conference Global 2018 just wrapped up, it is time for the European Aero-Medical Institute (EURAMI) to review what has been a very successful event for the whole EURAMI team.

We are pleased to say that the EURAMI booth has proven to be a great meeting place for existing and new members and has once again shown that the interest in high quality accreditation is still on the rise.  EURAMI accreditation has clearly gained traction and importance as evidenced by the numerous new providers who expressed interested in applying for recognition.

It has been a particularly exciting week for EURAMI as the EURAMI Board elections were held during the 33rd General Assembly on Thursday, November 1st 2018. A very diverse and highly competent selection of candidates was presented to the members with different approaches and ideas for the further development of the association.

Sergio Abril and Mark Chapman were newly elected for their first term on the Board whereas Franziska Hollenstein was confirmed for her second term on the EURAMI Board. Philipp Schneider, Dr. Cai Glushak and Lisa Humphries will remain on the board to complete their term.

The selection of officers was done shortly after the election and EURAMI is delighted to announce that the Board has selected Dr. Cai Glushak as President, Philipp Schneider as Vice President and Mark Chapman as Treasurer. Dr. Glushak expressed heartfelt thanks to Dr. Laurent Taymans and Pascaline Wolfermann, outgoing president and vice-president respectively, for their extraordinary leadership and efforts to bring EURAMI to a new level during their tenure.

A great end to a busy conference was the last evening with the Gala Dinner and the ITIJ Awards on November 1st. EURAMI is proud to announce that five EURAMI companies were among the finalists.

In the category of Air Ambulance Provider of the Year 2018 all three finalists – REVA, SARPA and Air Alliance Medlflight - were EURAMI accredited providers with Air Alliance Medflight winning the award for the second time in a row.

Air Ambulance Worldwide was able to win the Award of Best Marketing Campaign of the Year whereas fellow EURAMI provider CEGA took home the award for Assistance Company of the Year. A great achievement from our members!

The EURAMI Board & Head Office would like to thank the ITIC organizers, conference participants and of course its members for such a successful ITIC and would once again like to congratulate all ITIJ Award finalists and winners. See you in 2019 in Malta!