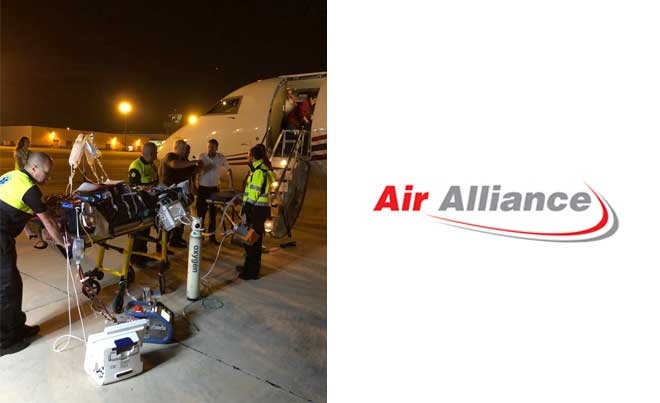 A highly specialised medical team just accomplished the aeromedical ECMO repatriation of a 36-year-old male from the Canary Islands to the UK, using the spacious Air Alliance Challenger 604.

The previously healthy patient had been on holiday with his wife and young family in Fuerteventura when he began to experience vague intermittent chest discomfort. When the patient turned to a local hospital, the presumed diagnosis was acute myocarditis, probably viral in origin. Worsening heart failure over the next 3-4 days necessitated transfer to an Intensive Care environment. He eventually required the placement of an Intra-Aortic Balloon Pump (IABP) to help offload his left ventricle and optimise his coronary perfusion.  However, the clinical situation deteriorated further, and the local surgical and medical teams were required to initiate full mechanical cardiac support by commencing Veno-Arterial Extra Corporal Membrane Oxygenation (VA-ECMO).

ECMO can be used for two main groups of patients: those with acute respiratory failure (Veno Venous ECMO) and those with some forms of cardiac failure (Veno Arterial ECMO). In acute respiratory failure blood is taken from one of the central veins, run through a membrane oxygenator and returned via another central catheter back into the venous circulation. In VA ECMO blood is taken from the venous side of the circulation and then through an oxygenator, as before, but returned under pressure to the arterial side of the circulation in order to generate adequate systemic blood pressure and flow to replace the function of the failing heart.

Given the complexity of this transfer we had a larger than usual retrieval team totalling nine people, including a Senior Air Alliance Flight Nurse (to provide aircraft familiarisation and logistical support), Two pilots, a consultant cardiothoracic surgeon, consultant intensivist, senior perfusionist, and two ECMO ICU nurses.

Loading a patient with this level of life-supporting equipment onto a CL604 is extremely challenging. We needed to raise the patient to the doorway, in a horizontal position, in a manner where all monitoring equipment remained visible to the crew and the many tubes and wires remained secure. This was achieved by careful placement of equipment, crew positioning, and use of the Challenger’s electrically operated loading system.

The flight was busy but uneventful, due in no small part to the extensive preparation and planning by the crew. The patient was off-loaded onto a specially designed and equipped ECMO retrieval ambulance used by the ECMO team, with support vehicle, and continued onwards to the London hospital.

This was an extremely successful transfer despite all of the potential pitfalls that were lying in wait. The mission was made possible by using all available time engaged in careful planning, the very high skill set of the entire team involved.