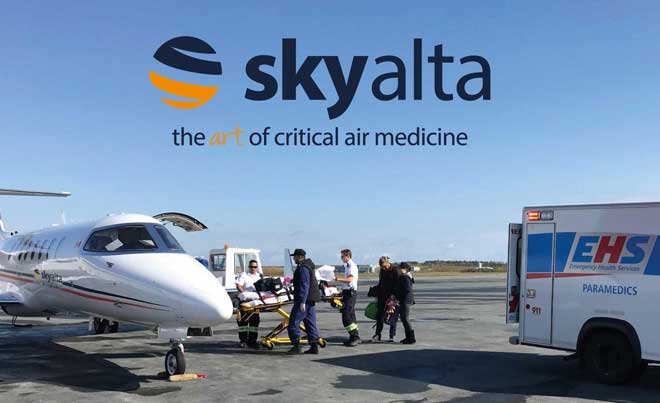 Skyservice Air Ambulance has announced they have re-branded and are now known as skyalta.

“Over the past two years we have acquired a commercial escort company and completed an acquisition of an aircraft operator and maintenance center that allows us to further solidify important aspects of our aviation operations” said Sam Cimone, President of SKYALTA.

“We have a new name, but the same mission, to deliver the art of critical air medicine each and everyday, whenever and wherever its needed” said David Ewing, Executive Vice President of Global Markets.

Skyservice Air Ambulance was established in 1989 and has a long history in the provision of high quality, accident free air ambulance flights on a global scale.

From bases in Montreal, Quebec and Toronto, Ontario, Canada, they have become known as one of the world’s most experienced air ambulance service.

They launched the program in September, 1989, with their first aircraft a Cessna Citation II. Their mission profile was mostly rescuing patients located in remote communities of Canada, such as Iqaluit and Rankin Inlet.

From that initial experience, they realized that they had an opportunity to enhance their medical services delivery system, thus creating an association with McGill University. At that time, their medical director Michael Churchill-Smith, MD developed one of the first aviation medicine fellowship programs, which to this day are active and thriving.

By developing this unique program they were able to improve the level of care to their patients. Additionally, instead of bringing non-acute stable patients from the north, they began to transport high acuity critical care patients. They also developed neonatal transport capabilities. This occurred in January 1990.

They developed a knowledge of the remote communities, so Canadian travel insurance companies turned to them to repatriate sick and injured patients that were out of country. They were one of the first companies in North America to supply this service to travel insurers. With the increased demand for quality air ambulance services for travelers, they reviewed the aircraft type in 1990; the aircraft of choice was the Learjet 24 and Learjet 25. They took the time to evaluate options and decided to proceed with the Learjet 35A. Over the next few years they purchased their fleet.

In 1992 they retired the Cessna Citation II, and in 1995 purchased their fifth and last Learjet 35A.

During this period they achieved many first milestones as a company:

As the years progressed they continued to improve on delivering state of the art medical equipment and continued to push the envelope in medical transport for their patients and clients worldwide.

In the mid 2000’s they were one of the first air ambulance providers to transport a patient on an inter-aortic balloon pump for a flight duration time of over 3 hours.

Skyservice Air Ambulance was the first air ambulance provider in North America to become EURAMI accredited for Special Care in 2007.

In 2010, they continued to advance critical care aero medicine as the only air ambulance provider to transport a patient on two left ventricular assist devices (LVAD) pumps simultaneously from the United Kingdom to North America, so the patient could receive a new heart transplant.

In 2011, they were again called upon to transport a critically ill child from Japan to North America using Extracorporeal Membrane Oxygenation (ECMO). Skyservice Air Ambulance completed these flights which were challenging and involved a team that could problem solve the challenges and evaluate the risk that all of the patients were exposed to.

More importantly they approach all of their patient transports this way to ensure that they manage both the patient and their clients risk safely and efficiently. As they continued to advance critical care air medical transport, in 2010 the process of fleet renewal evaluation began and in 2011 they purchased their first Learjet 45XR. Skyservice Air Ambulance was the first provider in North America that has a medically dedicated Learjet 45XR fleet.

In 2012 their second Learjet 45XR joined the fleet with their third Learjet 45 XR scheduled to join the fleet by year end. The new Learjet 45XR fleet are equipped to transport two patients on Lifeport stretcher systems. The interior was modified with a custom, certified medical cabinet that permits them to carry maximum medical oxygen supply for their high acuity intensive care patients.

Skyalta has invested heavily in patient care equipment for the future The renewal of equipment to Physio Control Lifepak 15’s to the state of the art T1 Hamilton Ventilators which improve patient ventilatory care during transport. The goal is not to just maintain their care but to improve their medical condition and treatment enroute to have an impact on the patients outcomes with a quicker and non delayed recovery.

As they continue to grow as Skyalta, they have welcomed their 31,000th patient on board. Their future is bright and with their investments in aircraft and medical equipment they will continue to remain an industry leader going forward.