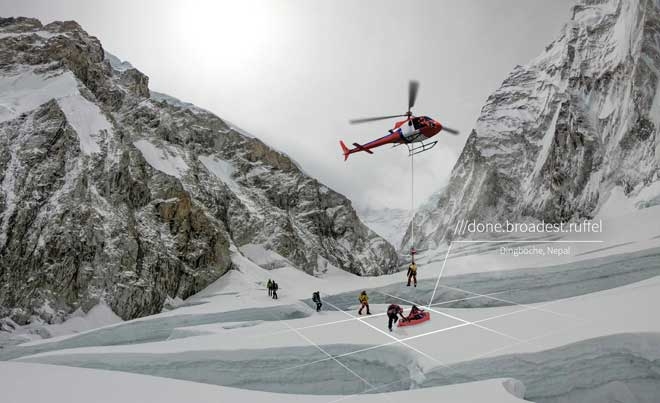 These three random words saved the life of a British woman in Nepal after she fell and injured her head and shoulder, in below zero temperatures, while trekking at 4,500m in Dingboche en-route to Everest Base Camp.

The adventurers husband called the emergency assistance number listed on their travel insurance policy to request help, but they were both disorientated and unsure of their exact location.

“Traveller Assist sent me a message via WhatsApp with a link to download the what3words app.” The 51-year-old former school teacher from Oxfordshire said.

Within 90-seconds, Mr. Ward was able to send three words, that identified their location, to Traveller Assist who immediately dispatched a helicopter to rescue the patient and transport the couple to a hospital in Kathmandu.

“I’m not very tech-savvy, but after clicking on the link that was sent to me, I had the app within a minute and it was very simple to use.” Mr. Ward said.

“I’ve been telling everyone I know to download it because you just never know do you.”

what3words has divided the world into 3m x 3m squares, assigning three random words to each square, that helps users find their location with an accuracy of just 10 feet, and it’s quite literally saving lives.

Recent cases where what3words has been used by Traveller Assist include a capsized yacht in the Caribbean, a diving accident in the Maldives, a terrorist attack in Somalia, a road traffic accident in Kenya and to pinpoint the exact pick-up point for helicopter evacuations in Haiti during violent protests and in the Bahamas before Hurricane Dorian hit.

Today people nearly always have their phone on them, and we need to use the tools like that, at our disposal to improve safety and potentially save lives. By using what3words, three dictionary words could mean the all-important few minutes between a safe recovery and something much worse ’ Added Chris Sheldrick, CEO and co-founder of what3words.