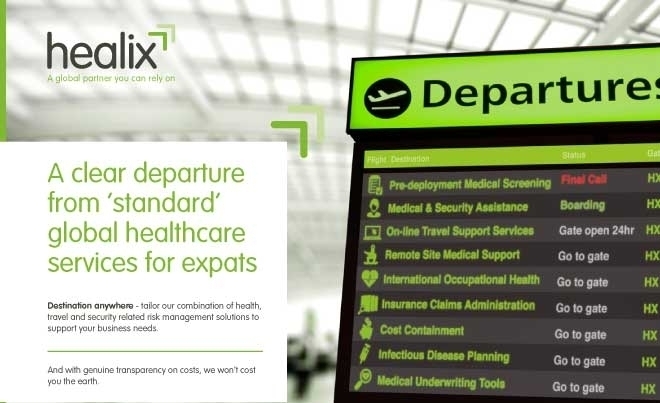 Healix International, the global travel risk management and international medical and security assistance provider, has assessed the current medical and security risk landscape and is predicting the outlook for 2020 in its Risk Oracle 2020 insight report.  Designed to give HR, Risk and Security Managers the best insight into areas around the world that present the greatest risk to employees and operations, the 2020 report identifies security, medical, political and operational risk factors.

“2019 will be remembered as one of the most unpredictable from a political risk perspective”, said Mike Webb, CEO, Healix International. “But the fact of the matter is that business still needs to be done and technological advances have meant the world is a smaller place for corporations, with employees working in ever more far flung regions, as well as travelling further for face to face meetings.

“In this context, it is vital that employers have a full insight into the security and medical risks employees may face so that the right mitigation measures can be taken. And our Risk Oracle 2020 report provides valuable topline insight for this purpose.

“During 2019, in the security and operational risk space we saw more of a continuity and evolution of longer standing risks that continue to dominate the headlines and shape the way in which businesses operate. For this reason, alongside identifying the major risks organisations should consider, the Healix Risk Oracle 2020 has also focused on some of the lesser known risks, as well as providing advice on helping organisations take a broader view of their most valuable asset - their people.”

1. THE MARCH TOWARDS PROTECTIONISM

Some major powers have taken steps towards protectionism in 2019, moving away from more globalised and frictionless trade markets. This was seen most prominently in the escalation of the trade war between China and the US. Uncertainties regarding the future relationship between the UK and the European Union will remain prevalent in 2020.  Protectionism, tariffs and trade disputes are becoming increasingly politicised debates, and Healix International expects this to continue into 2020.

Identity politics continues to grow as an influencing factor in many political spheres, with individuals increasingly demonstrating a tendency to favour political parties and movements associated with a particular religion, race or other self-identifying factor. For example, in India in 2019, President Narendra Modi focused upon issues of national security and identity politics during the presidential campaign, courting the majority Hindu vote and marginalising the Muslim minority. US President Donald Trump has used identity politics to appeal to his base, largely based on immigration and trade, which is likely to continue during the 2020 presidential election campaign.

3. TRANSNATIONALISM OF THE FAR-RIGHT

The risk of far-right extremism has been steadily growing across the Western world, with high-impact attacks in Christchurch and El Paso demonstrating the increased intention of extremists to pursue aggressive actions. One of the most concerning trends is the internationalisation of the far-right threat. Extensive far-right communities have developed using online forums and messaging sites, largely masquerading under the guise of ‘free speech’ forums. These interactions are facilitating radicalisation and recruitment. Social media has made it easier to fuel a cycle of violence worldwide, with radicalised individuals inspired by the actions and words of others. With the online space notoriously difficult to police, further attacks by far-right extremists in the Western world inspired by the growing global movement are likely in 2020.

4. A GULF IN STRATEGIES

Tensions between the Gulf States have continued to dominate diplomatic and military considerations in 2019. And although direct conflict between a combination of US, Saudi Arabia and Iran has been avoided, notwithstanding the ongoing proxy war in Yemen, further developments are highly likely in 2020, and the situation remains fluid and unstable.

An old proverb states that “when America sneezes, the world catches a cold”, and nowhere is this more true than in the global markets. Economic indicators are causing analysts to speculate over the potential for the US economy to enter a recession. Globally, advanced and developed countries have demonstrated weak growth and a UN report has warned the global slowdown raises risks of a recession in 2020. Red flags such as trade wars, Brexit, protectionism and fluctuations in interest rates have contributed to the global slowdown.

Although the reasons for shortages of goods can be myriad, 2019 demonstrated the impact supply shortages can have on national stability. This was especially apparent in the Latin America region.  As a consequence, violent anti-government protests have taken place in numerous countries, with activists blocking roads with burning objects and rioting. Shortages of basic goods are unlikely to be a worldwide issue in 2020, but Venezuela, Cuba and Haiti are examples of how significantly domestic operational risks can increase exponentially due to internal and external shocks.

Measles is a vaccine-preventable disease and yet remains a global killer that is here to stay – at least for the next few years. Due to vaccination neglect by many countries and the spread of the ‘anti-vaxx’, or anti-vaccination message, fuelled by social media, childhood immunisation programmes are being eroded away and this makes measles a real medical risk globally.   It is the scattered groups of unvaccinated people that threaten the ‘herd immunity’, the general level of immunity in the country that serves to protect the majority. As such, it will be years before the many countries that were previously deemed free of measles are able to satisfy the World Health Organisation that they have again reached eradication status.

Dengue fever causes the greatest disease burden of any virus transmitted by mosquitoes, ticks or other insects, with an estimated 100 million infections per year, according to the World Health Organisation. There are an estimated 10,000 deaths from dengue every year. While the first vaccine for dengue has recently been licensed, its use is limited. It is hoped that among other vaccines still in trial, a solution will be discovered that will be more universal in distribution and will have a greater impact on the disease demographics.

The Healix International Oracle Risk Report 2020 can be downloaded from https://info.healix.com/risk-oracle-2020