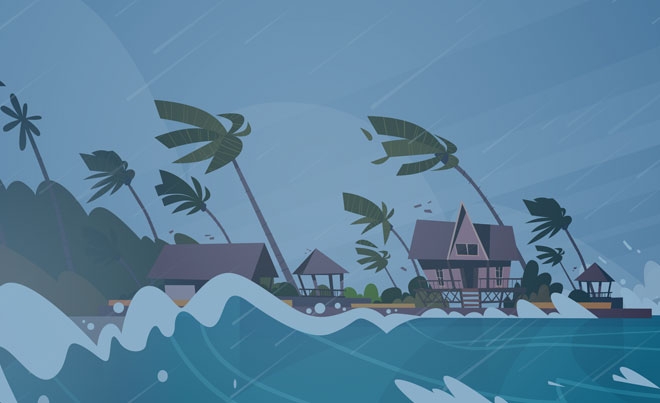 The hurricane trio of Harvey, Irma and Maria will cost the insurance industry a record amount in 2017: the final insurance bill for those and other natural catastrophes, including a severe earthquake in Mexico, is expected to come to US$ 135bn – higher than ever before. And overall losses – i.e. including uninsured losses – amounted to US$ 330bn, the second-highest figure ever recorded for natural disasters. The only costlier year so far was 2011, when the Tohoku earthquake in Japan contributed to overall losses of US$ 354bn in today’s dollars.

Torsten Jeworrek, Munich Re Board member responsible for global reinsurance business, “This year’s extreme natural catastrophes show how important insurance is in absorbing financial losses in the wake of such disasters. Munich Re is willing to develop this business further – we have the necessary capacity and expertise. For me, a key point is that some of the catastrophic events, such as the series of three extremely damaging hurricanes, or the very severe flooding in South Asia after extraordinarily heavy monsoon rains, are giving us a foretaste of what is to come. Because even though individual events cannot be directly traced to climate change, our experts expect such extreme weather to occur more often in future.”

The year’s loss figures in detail:

The overall loss figure of US$ 330bn, for all types of natural disaster, was almost double the ten-year, inflation-adjusted average of US$ 170bn. Losses from weather-related natural catastrophes set a new record. Insured losses were almost three times higher than the average of US$ 49bn. Our statistics identified a total of 710 relevant natural catastrophes, which was also significantly more than the average of 605. Approximately 10,000 people lost their lives in natural disasters this year, which is a slightly higher figure to last year’s, but at least much lower than the ten-year average of 60,000. (Read more)

US losses dominate the statistics

The US share of losses in 2017 was even larger than usual: 50% as compared to the long-term average of 32%. When considering North America as a whole, the share rises to 83%.

Some facts about the natural disasters that affected the USA:

Tony Kuczinski, President and CEO of Munich Re, US, “This hurricane season is a stark example of the incredibly important role that Munich Re plays in helping people and communities rebuild in the wake of natural catastrophes. And we learned from these events. First, that mitigation and improved risk management, such as stronger building codes in Florida, can work to reduce losses and promote life safety. Second, there continues to be a substantial insurance gap, even in a highly developed market like the United States where, for example, the vast majority of home and small business owners do not purchase flood insurance. Our industry’s risk expertise, capital strength, and claims-handling infrastructure are critical to finding meaningful solutions, and Munich Re is an active participant in the public-private partnership that seeks to offer more flood insurance options and promote flood protection.”

Unusually low temperatures in April caused billions in damage to European farmers since their crops had already grown robustly in an otherwise warm spring. Depending on the region and particular fruit, harvests were up to 50% smaller than usual. Another apparent paradox is that such events may start to occur more frequently in the future as a result of climate change: plants in certain regions are beginning to sprout earlier in spring, while the threat of frost often does not diminish to the same extent, so that the risk actually increases. Losses caused by the late frost amounted to US$ 3.6bn (€3.3bn), of which only US$ 650m (around €600m) was insured, given the low insurance penetration in the agricultural sector.

Some 2,700 people lost their lives following an extremely severe monsoon in South Asia. The annual monsoon season, which brings the otherwise desperately needed rain, lasted about four weeks longer than normal in 2017. The regions most severely affected this time were the Terai lowlands in Nepal, where almost half of the Nepalese live, as well as certain Indian provinces along the Himalayas. In some districts, three-quarters of the territory was under water. The fact that only a small fraction of the US$ 3.5bn in total losses was insured contributed to the humanitarian catastrophe. (Read more)

Hermann Pohlchristoph, Munich Re Board member responsible for Asia-Pacific, “In the Asia-Pacific region, natural catastrophe losses were thankfully less severe than in previous years: at US$ 33bn, they were below both last year’s total of US$ 96bn and the ten-year average of US$ 85bn. At the same time, the numbers show how alarmingly sparse insurance cover still is in Asia: only 8% of losses there were insured. And yet appropriate insurance solutions do exist, which can significantly help get people and economies back on their feet financially after a natural disaster.”

Ernst Rauch, Head of Climate & Public Sector Business Development, “The above-average share of insured losses this year masks the reality of how little coverage many parts of the world still have. In many developing countries, losses from natural catastrophes often remain almost totally uninsured. And even in highly developed countries like the US, whose share of insured losses is significantly greater, more widespread insurance coverage would still be very beneficial to the economy. Though there was in fact a slight silver lining among all the clouds: Irma and Maria meant that some Caribbean islands were hit twice in a row by severe hurricanes this year. Yet only a few days after the events, the CCRIF (Caribbean Catastrophe Risk Insurance Facility), a public-private regional insurance pool, was able to pay out around US$ 50m in emergency funds. Munich Re supports the development of such pool solutions that can do much to help close the gaps in cover that exist in many low-income countries.”

Munich Re stands for exceptional solution-based expertise, consistent risk management, financial stability and client proximity. This is how Munich Re creates value for clients, shareholders and staff. In the financial year 2016, the Group – which combines primary insurance and reinsurance under one roof – achieved a profit of €2.6bn. It operates in all lines of insurance, with over 43,000 employees throughout the world. With premium income of around €28bn from reinsurance alone, it is one of the world’s leading reinsurers. Especially when clients require solutions for complex risks, Munich Re is a much sought-after risk carrier. Its primary insurance operations are concentrated mainly in ERGO, one of the leading insurance groups in Germany and Europe. ERGO is represented in over 30 countries worldwide and offers a comprehensive range of insurances, provision products and services. In 2016, ERGO posted premium income of €16.0bn. Munich Re’s global investments (excluding insurance-related investments) amounting to €219bn are managed by MEAG, which also makes its competence available to private and institutional investors outside the Group.