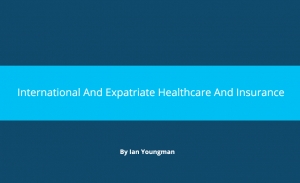 Following the huge success of the 2014 IPMI report the new edition of International And Expatriate Healthcare And Insurance now includes more countries and insurers; new information on laws and regulations PLUS countries current attitudes towards expatriates. The 2016 report also includes more details of new health insurance laws locally in various countries around the world.

"...The most complete fact filled business report is back and better than ever..." Christopher Knight, CEO, iPMI Magazine.

According to new research published by Finaccord, the global market for international health insurance for expatriates and students was worth around $12.98 billion in gross written premiums in 2015 of which around $2.78 billion was due to new policies bought in 2015 itself.

Commented David Bowles, Consultant at Finaccord, "The worldwide market for international health insurance is both large and fast-growing. Its value is not far short of that of travel insurance, which Finaccord estimates at around USD 15.8 billion in gross written premiums in 2015, although it constitutes a fairly small segment within the global market for all types of health insurance which is valued at around USD 1.21 trillion in the same year. Nevertheless, its compound annual growth rate of 11.1% between 2011 and 2015 is comfortably ahead of that for health insurance in general which is recorded at around 4.8% over the same period of time."

Overall, there were around 105.1 million expatriates and students worldwide eligible for international health insurance in 2015 defined as those temporarily resident in a country other than their country of origin for a period of between three months and ten years. These are composed of five main potential customer types, namely individual workers (most numerous at 83.3 million), corporate and other transferees (including diplomats and employees of charities and NGOs) and retired individuals, as well as students plus 'others' (defined as non-employed spouses and children of customers in the other four categories).

"By region of origin, these eligible individuals are most commonly from countries in the Asia-Pacific region given that there were a total of around 50 million of them in 2015," continued David Bowles. "Furthermore, as a destination region, countries in the Middle East attract the most such individuals albeit those going there are among the least likely to acquire international health insurance. Rather, insurance take-up rates are highest among eligible consumers heading to destination countries in Australasia, Latin America and North America with the high cost of healthcare in the latter region, especially the US, a particularly important factor in this respect. However, overall, less than 10% of all individuals eligible to buy international health cover actually do so in practice."

Looking ahead to 2019, Finaccord's research suggests that the compound annual growth rate in the value of this market is likely to pick up slightly to 11.7% which means that the market will be worth around USD 20.20 billion by that year in terms of gross written premiums. However, this expansion will be due primarily to rising average policy prices and secondarily to growth in the number of expatriates and students eligible for international health insurance rather than to an increase in the take-up for this type of cover which is expected to advance only modestly.

Concluded David Bowles, "If underwriters and intermediaries of international health cover can find ways to improve the distribution of their products then even a rise in take-up rates that is only slightly higher than that predicted could bring about a substantial increase in the forecast market value by 2019." 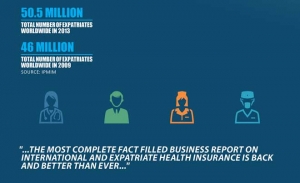 International healthcare used to be very simple; you designed one product and used it everywhere. But now there are local restrictions on who can insure, how, and what can be insured. Some countries require insurers to have local partners while in others it can take years to get an insurance licence.

iPMIM subscribers enjoy a special promotional price for this 900 page + report, from leading industry author Ian Youngman. Another reason to trust iPMI Magazine with your industry and market intelligence requirements.

Much more information has been added on the number of expatriates globally and by country –both outbound and inbound, and on local insurance regulation. On insurers and brokers it includes who has been buying who, countries they are moving into, plus the latest product and service developments. With the potential of domestic health insurance markets limited, US, UK and EU health insurers and intermediaries are increasingly looking at healthcare for expatriates and locals in international markets. 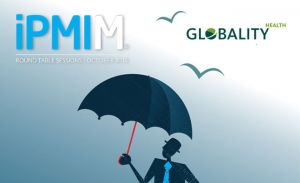 As expatriate hot spots around the world continue to mandate health insurance cover for expat employees, under various visa and employment laws, questions from the business community continue to be raised. Issues focus around how new laws will help and assist expatriates and what levels of cover they may expect from local health insurance plans.

A flood warning has been issued to Uttar Pradesh, Bihar, Assam and West Bengal due to the possibility of heavy rainfall in the foothills of the Himalayas over the next few days. The rainfall will also lead to swelling of rivers Kosi, Gandak and Ghaghara, tributaries of Ganga and all tributaries of Brahmaputra.

You should monitor local and international weather updates from the Indian Meteorological Department and follow the advice of local authorities and your travel company.

Before you travel to India, take out comprehensive medical and travel insurance and read the India specific health information and advice published by the National Travel Health Network and Centre. Be sure to speak with a professional insurance intermediary and check the coverage and small print. If you are taking the time to travel, you need to protect yourself and family financially if your holiday goes wrong.

An emergency abroad can be extremely expensive. Your credit card accident cover, home insurance or private health cover is not always sufficient. If travelling within the European Economic Areas you will need an European Health Insurance Card (EHIC) as well as medical and travel insurance.

Carlos de la Cruz, Regional Manager of Iberia & Latin America for Allianz Worldwide Care, has won ‘Most Professional Insurance Supplier’ at the Red Expat Awards, which were held in Spain.  The Red Expat Awards honour individuals, multidisciplinary teams and suppliers in HR Global Mobility Management. Winners are selected by almost 200 industry professionals who vote for their most impressive peers in terms of service excellence in the expat community.

Allianz Worldwide Care is the international health and life insurance division of Allianz Worldwide Partners, providing health, life and disability insurance on a global scale.  Corporate clients include small, medium-sized and large companies operating on a multi-national basis who require insurance and corporate assistance services as part of their employee benefits package.

Carlos de la Cruz, who has been with Allianz Worldwide Care for over 10 years, was recognised for his expert knowledge and professionalism within the international health insurance sector.

Commenting on the award, Carlos said, ‘It is a huge honour to be  recognised by my industry peers. I believe that this award tells a wider story about the work Allianz Worldwide Care is doing within international health and life and its ongoing focus on the current and longer term needs of its clients.”

Red Expat is an established professional community specialising in expatriation HR and global mobility management. Now in their third year, the Red Expat awards are considered to be amongst the most prestigious in the expat insurance industry.

CEGA has further invested in its market-facing capabilities by recruiting three new members for its business development and marketing team.

The trio will develop CEGA's existing and new business propositions both within and beyond the UK. This will include extending international partnerships and launching innovative and cost-effective claims, assistance and travel risk management propositions for clients who have customers or employees travelling abroad.

"The expansion of our business development and marketing team is integral to our on-going commitment to business growth and to adding real value for potential and existing clients," says CEGA's Chief Executive Alistair Hardie. "It is also recognition of the ever-increasing demand for our services, not just from insurers, but also from the standalone corporate and public sectors."

CEGA is one of the leading independent providers of global emergency assistance, risk management and claims management services. It provides services to a blue-chip client base that includes many of the world's leading banks, insurance companies, government departments and other global brands.

Now Health International has announced details of their WorldCare product and premium review effective from 1 August 2015.

Now Health’s benefit review enhances the company’s WorldCare product proposition by providing enhanced discounts and additional benefits, whilst keeping premium increases to a minimum.  Premiums for business underwritten in the Europe branch will be increasing by only 2%*.

As part of the review, Now Health is offering a 10% introductory discount for new individual customers in their Europe and Global branches**. This discount is available up until 31 December 2015.

In addition to this:

For business written in Singapore and China, a brand new No Claims Bonus feature has been introduced and will reward customers who do not claim. Designed to offer year-on-year savings, the No Claims Bonus offers an automatic 10% discount on renewal providing no claims have been made and a 15% discount over two or more subsequent years.  Claims made under the routine dental benefit will not affect the No Claims Bonus.

Around 133,665 British nationals visited the Philippines in 2014. Most visits are trouble-free. Take out comprehensive medical and travel insurance before you travel to the Philippines.

With effect from June 2015, all Philippine airlines are allowed to operate in European airspace.

The FCO can’t offer advice on the safety of individual airlines. However, the International Air Transport Association publishes a list of registered airlines that have been audited and found to meet a number of operational safety standards and recommended practices. This list is not exhaustive and the absence of an airline from this list does not necessarily mean that it is unsafe.

A list of incidents and accidents can be found on the website of the Aviation Safety Network.

In 2009 the International Civil Aviation Organisation carried out an audit of the level of implementation of the critical elements of safety oversight in the Philippines.

Take out comprehensive medical and travel insurance before you travel to Greece. The currency of Greece is the euro. When travelling outside of the UK, you should take more than one means of payment with you (cash, debit card, credit card). Visitors to Greece should be aware of the possibility that banking services – including credit card processing and servicing of ATMs – throughout Greece could potentially become limited at short notice. Make sure you have enough Euros in cash to cover emergencies, unforeseen circumstances and any unexpected delays.

There are regular strikes. These are sometimes called at short notice and can cause disruption to public transport in and out of Greece (including air travel and ports). Demonstrations take place regularly in central Athens, and have also taken place in other towns and cities. You should avoid all demonstrations and follow the advice given by local security authorities.

In the early hours of 10 April 2014 there was a large explosion outside the Bank of Greece in central Athens. There were no reported injuries.

British nationals make around 2 million visits Greece to every year.