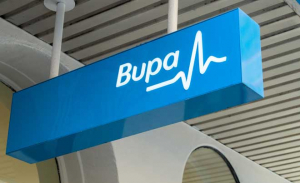 Bupa and Mayo Clinic have a shared focus on offering high-quality healthcare and customer satisfaction. Mayo Clinic, with a primary value of putting the needs of patients first, is ranked the best hospital in the world by Newsweek and the No. 1 hospital in the United States by U.S. News & World Report. Mayo Clinic serves roughly 1.3 million people from nearly 130 countries every year.

Bupa was named Health Brand of the Year at health insurance industry magazine COVER’s ‘Recognising Healthcare Innovation Awards 2021’ and is rated ‘Excellent’ by customers on Trustpilot - the highest scoring major health insurer in the UK.

"The relationship with Bupa is an important part of the evolution and growth of Mayo Clinic Healthcare," says G. Anton Decker, MBBCh, a gastroenterologist and president of Mayo Clinic International. "We are privileged to partner with Bupa and it affirms our commitment to care for patients in comprehensive and collaborative ways."

Alex Perry, CEO of Bupa Insurance said, “Mayo Clinic Healthcare’s reputation speaks for itself, so its new London clinic is a great addition to the portfolio of hospitals and clinics where our customers can receive treatment and care. It shares our customer focus and commitment to delivering the best outcomes for them.” 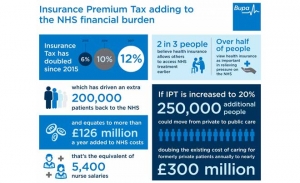 A tax on health insurance that pushed many thousands of private patients back onto the NHS is costing taxpayers more than £1bn a decade in additional NHS resources – and it could soon get much worse.

Findings from independent economic experts Cebr and Bupa has not only verified the link between rising Insurance Premium Tax (IPT) rates and increased burden on the NHS, but it has quantifed the cost to the service – £126m a year – of looking after the extra 200,000 patients driven back to the NHS since 2015.

Furthermore, Bupa warns that if this tax were to be set at the same level as VAT, a further 250,000 people could move from private health into public care, doubling the existing cost to the NHS of caring for formerly private patients, to nearly £300m a year.1

As such, the health provider claims that using this tax to even partly fund the extra £20bn that has been promised to the NHS is the health equivalent of ‘robbing Peter to pay Paul’.

Alex Perry, CEO of Bupa Insurance said, “On behalf of consumers, we want to highlight to the Chancellor that raising this tax is unfair, and a case of robbing Peter to pay Paul, as it drives consumers away from health insurance straight onto the NHS at a time when the service would struggle to increase capacity.

Insurance Premium Tax has almost doubled since 2015 (from 6% to 12%), putting additional cost directly on to the consumer. Insurance Premium Tax is applied to motor, home, travel and pet insurance policies however most consumers (65%) are not aware what the tax even is, or they’re unsure of who pays the tax or wrongly view it as a tax on the insurer (36%). Furthermore, consumers don’t see additional taxation as the route to ‘fix’ the NHS, with just 27% approving of additional taxation, versus 47% against (DeltaPoll).2

Cost is the main factor for the public when choosing to buy health insurance, which explains the high attrition rates for individual policies. When questioned, one in three (33%) policyholders say they would consider cancelling their policy if their premium went up while a third (33%) of the wider UK public would consider taking out insurance if costs were lower.

Our research found that two thirds (63 per cent) of people say that health insurance allows others to access NHS treatment earlier and over half (55 per cent) view it as important in relieving pressure on the NHS.

Alex Perry continued, “Insurance Premium Tax is essentially a tax on acting responsibly. As a society we should be encouraging people to take responsibility for making sure that their homes, cars and health are insured.”

“Ahead of the Budget Statement we’re calling on Government to commit to freezing the standard rate. If the decision is made to increase the rate of tax on health insurance again, the NHS and all those using it will be impacted.”

Steve White, Chief Executive at The British Insurance Brokers’ Association (BIBA) says “It’s enlightening to see the full economic scale of the impact of Insurance Premium Tax shared within this report. We’re concerned that the UK public aren’t aware of and don’t understand the full extent of this hidden tax on their policies, so the more information we have about the impact of IPT that we can use to spread awareness, the better. The public are being penalised for choosing to pay for insurance. We, along with our members, insurers and industry bodies, are making these concerns clear too. It’s our members’ view that current policy on Insurance Premium Tax is discouraging people away from choosing insurance, and the more people and businesses that remind Government of the detrimental impact of IPT, the more difficult it will be for them to push through with any further increases.”

Stuart Scullion, Executive Chairman at ‎The Association of Medical Insurers & Intermediaries (AMII) comments “The findings within this report shed a great deal of light on the true cost of IPT, and allow little room for argument over the wider economic impact of the tax on health insurance. This report shows us that the government is not considering the wider implications of generating revenue from IPT, particularly in relation to the costs to the NHS and health sector. We’re expressing our concerns about this with the aim of asking the industry, the government and the public to wake up to what’s going on and the consequences of it. There are manyß consumer purchasers of PMI, including many older citizens, who are going to be forced back into using NHS services if the cost of their PMI becomes unsustainable. How does that benefit the NHS? The government should be encouraging the purchase of PMI as a means of reducing the strain on an already overstretched NHS, not pushing thousands of people back onto it.”

John O'Connell, Chief Executive at The TaxPayers' Alliance added, "It was deeply concerning that the Labour manifesto singled out health insurance for specific punishment, especially as those who protect themselves with health insurance save taxpayers' money and lighten the load on the NHS. However the current Government has fared no better in comparison - by hiking Insurance Premium Tax across the board it is punishing those who do the right thing and protect themselves and their families. If the government wants to show that it really is on the side of hard-working people it would cut or at least freeze IPT at the Budget."

Research is a combination of data analysis from Cebr and additional polling by Opinium Research (carried out 11th-13th September 2018, sampling a representative sample of 2,011 UK adults).

Cebr analysis used Bupa monthly data (2003-2017) on individual consumer behaviour in response to changes in IPT. These behaviours were extrapolated to the wider consumer health insurance market, using 2016 LaingBuisson market data, to model the number of people who lapse from health insurance in general after an IPT increase. Research from Kelly, Stoye, and Vera-Fernandez (2015) was used to calculate the average cost of an individual on the NHS over one-year, five-year, ten-year, and lifetime periods. These data points were then combined to calculate a total cost to the NHS of increases in IPT, over these time periods. Further methodological data is available upon request.

2. Deltapoll survey carried out in August 2018 on behalf of the Sun on Sunday