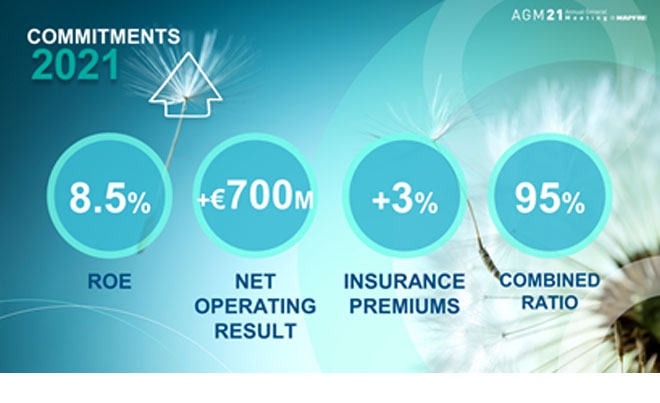 MAPFRE held a Management Insights Day today in Madrid, bringing together more than 100 investors, analysts and other financial experts to analyze the company's business prospects and financial situation.

At the meeting, MAPFRE provided an update on the Group's solvency position, noting that the provisional data, sent to the Supervisor as part of the framework of financial stability, reflects a ratio of 183.5 percent as at the end of 2020. However, the company expects to receive approval from the Spanish supervisor for the internal model for calculating longevity risk within the Group, which would elevate the ratio above 190 percent. In addition, the Bankia exit from the balance sheet, expected to take place over the course of 2021, would add an additional five percentage points to the ratio.

At the meeting, the chairman and CEO of MAPFRE, Antonio Huertas, analyzed the group's current business prospects, explaining that the company’s growth objectives were to be concentrated in strategic markets such as Spain, Brazil, the United States and Mexico. He also reiterated the financial objectives announced last Friday during the Annual General Meeting.

The MAPFRE chairman and CEO also highlighted the company’s ongoing digitalization push, noting that digital revenues grew 10.8 percent in 2020, while policies taken out via MAPFRE’s online channel were up 9 percent and that Verti’s premiums had risen 6 percent. Digital transaction volume also rose by 13.6 percent in 2020.

The chief financial officer, Fernando Mata, explained the financial position of the company, citing the healthy balance sheet and excellent solvency position. MAPFRE also presented for the first time a calculation of its solvency position as measured using the international capital standard, ICS, a model for calculating the solvency of internationally active insurance groups that is under development. MAPFRE is the only Spanish group to which the ICS is being applied, which reflects a comparable view of the capital position of large international groups by standardizing the measurement for all markets. According to the 2019 ICS model, the solvency ratio would have been 228.6 percent at the end of 2019, compared to 186.8 percent that MAPFRE reported under the Solvency II model.

MAPFRE also published the breakdown of the solvency data for the Group's companies with provisional data as at the end of 2020, and it once again highlights the solvency position of MAPFRE VIDA, which leads the Spanish insurance companies with a ratio of 483 percent.

MAPFRE RE's CEO, Eduardo Pérez de Lema, updated the situation regarding MAPFRE's reinsurance business, which for 2021, foresees a return to making a solid contribution to Group earnings, after 2020 was marked by the impact of COVID-19 and natural disasters. Finally, group chief investment officer, José Luis Jiménez, presented the Group's investment policy, and commented that MAPFRE will continue with its strategy of increasingly diversifying its assets, while maintaining the prudent and long-term-oriented profile that characterizes the company’s investment philosophy.

The Management Insights Day was led by Felipe Navarro, who was recently appointed Group Head of Capital Markets, assuming MAPFRE's investor relations role. Navarro is an economist and until this year was CEO of MAPFRE in Malta. The meeting, held in Madrid, was broadcast live on the corporate website.

More information is available at http://noticias.mapfre.com/.