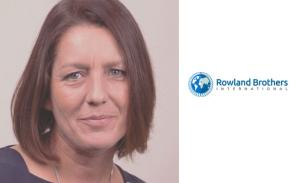 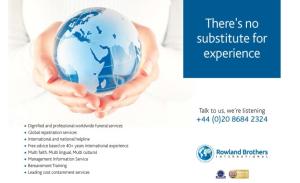 Rowland Brothers International are proud to be the winners of the first ever Ancillary Assistance Service Provider of the Year award at the ITIJ Industry Awards 2016. This global industry event took place at The Ritz-Carlton in Berlin on the 3rd November 2016 and was the... 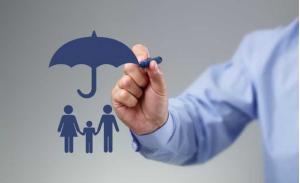 Aviva‘s latest Family Finances Report highlights very clearly the lack of planning people generally have in place should they die. It also reveals that although families know they should plan ahead for the inevitable, they find it difficult to have those important conversations.  The report suggests that...

Rowland Brothers International has been providing advice and international repatriation services for over 40 years. Our reputation and expertise are such that they we have been the official helpline for The National Association of Funeral Directors and its members for 15 years.

Rowland Brothers International repatriation service started in 1971. The family funeral business, Rowland Brothers, established in the 1870s , was asked to exhume and repatriate a Countess to France. Then Senior Partner Tony Rowland was asked to set up a repatriation strategy for a popular tour operator, Intasun, which organised package holidays to Spain. Rowland Brothers International developed and has since worked with numerous holiday companies, insurance and assistance companies, and international corporations around the world. As our worldwide network grew, so did our connections with international organisations such as Insurance and Assistance companies, the Foreign and Commonwealth Office, the Red Cross, Missing Abroad and the Metropolitan Police.

Rowland Brothers International works with funeral assistance companies all over the world. Our comprehensive repatriation service focuses on three areas: cost containment, bereavement care and quality of service. Our profound understanding of customs, religions and cultures worldwide enables us to provide a caring service to all communities.